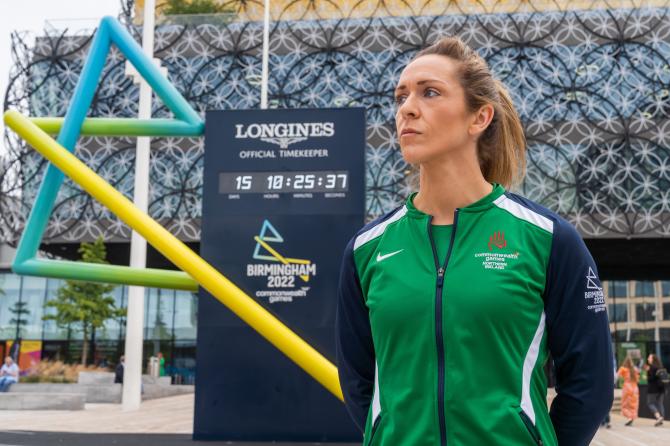 Doctor, netballer, and Gaelic football star, Caroline O'Hanlon admits that the day job puts the trials and tribulations of being an international athlete into perspective.

O'Hanlon will lead Team Northern Ireland in netball at this summer's Commonwealth Games in Birmingham, three years after helping club side Manchester Thunder to the 2019 Superleague title.

But O'Hanlon's talents do not stop there, with the 37-year-old also representing Gaelic football side Armagh LGFA.

Being a multi-sport athlete would be more than enough pressure for most people, but the star combines her exceptional sporting record with a remarkable career as a doctor.

But for O'Hanlon, splitting her time between the three is a blessing, not a curse.

"In terms of work, it is a good reality check to realise that there are things beyond sport and that you are dealing with stress and pressure and time management," said O'Hanlon, who was speaking during a four nation photoshoot in Birmingham, which saw athletes from each of the home nations come together for the very first time to celebrate the final countdown to the Games.

"So that is obviously vital when you're competing in sport, just dealing with pressure but also it gives that reality check that it is just sport at the end of the day.

"And then Gaelic and netball have a lot of crossover skills, and I think that just the physicality of Gaelic has added that element to my netball.

"Netball has grown and become a lot more physical game, so I think that has really benefitted me.

"If you didn't get that feeling of excitement, then you would not do it.

"It is a big effort, but it is definitely worth it, and as I say, I travel to compete throughout the year, and if I wasn't enjoying it or if I didn't still have that buzz around it, then I would not be doing it."

This summer, Team Northern Ireland, supported by funding raised by National Lottery players, will compromise of over 100 athletes, and having secured her place on the squad, O’Hanlon is looking for medal success.

With the Birmingham 2022 Commonwealth Games set to inspire people and communities across the country this summer, O’Hanlon hopes sharing her story will give others motivation to get involved in sport and turn their dreams into reality.

She was also a member of the Ireland women's international rules football team that defeated Australia in the 2006 Ladies' International Rules Series, and in 2010 she was named Northern Ireland Sportswoman of the Year.

She said: "The support from The National Lottery is absolutely vital.

"We receive funding indirectly through Sport NI and through Commonwealth Games Team NI, so without that, we would not be able to take part.

"So, obviously, we are very grateful to anyone who takes part in The National Lottery, and it is great that the funds come from that and are invested in grassroots and elite sport.

"I hope that everyone who takes part in The National Lottery realises the benefits of playing.

"It is not just elite sportsmen and women who benefit, but also grassroots level who will receive funds from that.

"So, it is brilliant, and I know the whole squad would like to thank them for taking part.”

PLEASE LEAVE IN FINAL PAR - National Lottery players raise more than £30million a week for good causes including vital funding into sport – from grassroots to elite. Find out how your numbers make amazing happen at: www.lotterygoodcauses.org.uk and get involved by using the hashtag: #TNLAthletes.