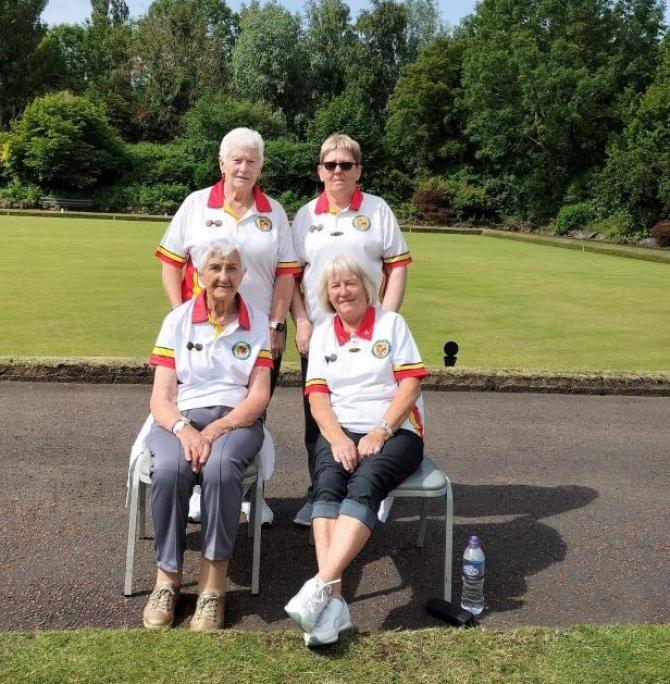 One of the Lurgan Senior Fours who won through to the NIWBA Semi-finals. Standing are Irene Doone, Angela Thompson and seated are Iris Anderson and Liz Patterson.

It was a great day for Lurgan Ladies last Thursday afternoon when they met Newcastle at home with the weather being good and the sun was shining on the Lurgan players as they played some brilliant bowls.

On Rink 1 Eileen Robson’s team played a close game and at the 11th end all was even at 11 shots with the remaining ends being closely fought but a good 4-shot win on the 18th end gave them a final score of Lurgan 18 Newcastle 15 and a valuable point to aid the overall home win.

Doreen Wheelan led her team to an impressive win on Rink 2 with a final score of Lurgan 31 Newcastle 5 made possible by the Lurgan team being unstoppable with taking 3 and 4 shots at seven individual ends.

Rink 3 was led by Angela Thompson and once again the Newcastle team could not match the scoring of the Lurgan team, who were sitting 19 shots against Newcastle after the 6th end. Newcastle fought back but could not break Lurgan’s early lead with the final score being Lurgan 24 to Newcastle’s 14.

Irene Doone’s team found themselves out-matched by the Newcastle team on Rink 4. At the 10th end the score was Lurgan 10 Newcastle 3, but then the Newcastle team couldn’t put a bowl wrong and took the next 7 ends to finish 15-11 up and deny Donne’s rink a league point.

The final score was Lurgan 84 Newcastle 49 with the home side winning on 3 rinks and resulting in an excellent 6 points win to keep in touch with top of the league Portadown; while also hoping for a win against them in a re-arranged later in the season to narrow the gap.