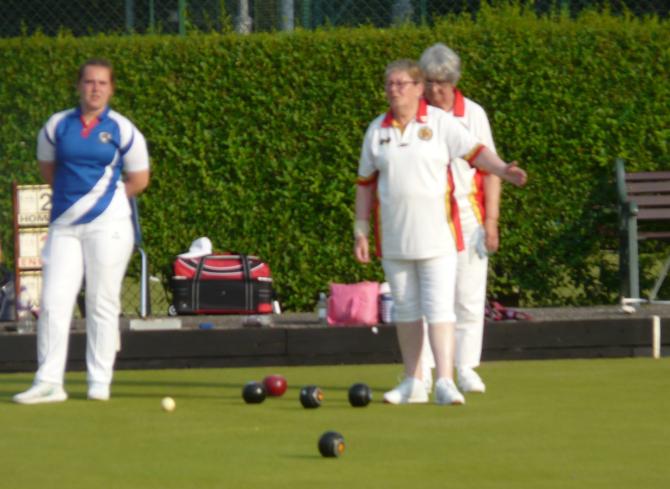 Veterans Team Lurgan 1 went to play Markethill won by 11 shots and came home with the full 10 points to keep top place in NIVBL Zone B Section 4.

On Rink 1 Robert Kennedy, Peter Ruffold, Peter Dew and Alan Briggs took the lead on the 6th end to be ahead 6-4. They stretched their lead further by winning ends 11 to 13 to be 13-8 ahead and won the 15th end by 2 shots to go 15-9. They did well to restrict the Robert Hunter’s rink to single shots over the last 3 ends to win by 15-12.

Ivor Mitchell, Eamonn Quinn, Dick McClune and Harry Cosgrove on Rink 2 led from the 3rd end and were 13-3 up at the halfway stage and 16-4 after the 13th. In spite of a brief comeback by the home four Cosgrove’s rink won well by 19-11.

Lurgan 2 turned the tables on neighbours Dunbarton who had beaten the home side earlier in the season. Winning on rink they claimed 6 valuable points and hope that their fortunes will be raised for the remaining few matches.

Stewart Martin, Charlie Maguire, Peter McGrail and Billy Strain played a hard game against Danny Tumilty’s rink and did well to finish just 1 shot behind at 10-11; having been 2-8 down at the midpoint.

On Rink 2 Victor Masters, Mike Parr, Dick McClune and Sam McCombes shot into and 11-1 lead on the 4th end on which they took a sensational 7 shots facing Norman Cunningham’s rink’

Cunningham urged men into the game and they responded well to by just 3 shots behind going into the 17th end but another 6-shot win by the Lurgan 4 on that end sounded the death knell for the visitors with McCombes’ rink finishing with a 23-15 win and 4 points and a 6-point win overall.