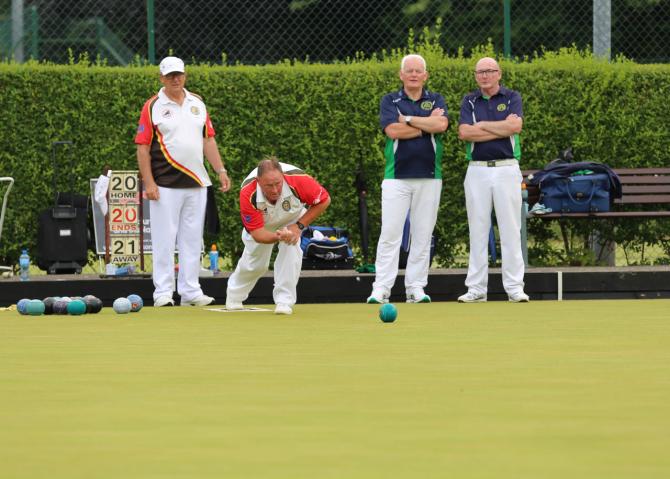 It was another sunny evening in the Park on Monday, July 18 when Lurgan met Portadown for their first pairing this season.

With Portadown having not been defeated so far this season, Lurgan were up for the challenge.

On Rink 1 the Lurgan four skipped by Irene Doone kept in pace with Portadown and shots were level at the end of the 9th end at 7-7.

This was to change on the 11th end when Lurgan got four shots that took them well into the lead. Portadown were unable to catch up in the remaining seven ends with the final score being Lurgan 17 Portadown 10.

During play Lurgan’s team on Rink 2 led by Angela Thompson matched the Portadown four to win nine ends each but on the fourth and eighth ends Portadown got four shots on both. Lurgan fought hard but were just unable to get the shots they needed resulting in a final score of Lurgan 11 Portadown 16.

The skip on Rink 3 was Doreen Wheelan and from the outset the Lurgan four took the lead and held it for the complete match. Portadown fought hard and were lying 1 shot behind at the end of the 16th.

Lurgan then took three shots on the 17th and one on the 18th end resulting in a final score of Lurgan 19 Portadown 14 – a good rink win to secure a vital league point.

On Rink 4 Eileen Robson’s team played a close game with the score at the 13th end even at 9 shots. Lurgan took four shots on the 14th end and Portadown took the next two ends by one shot on each. Going into the 17th end with Lurgan were leading by two shots.

It was a tense finish with Portadown scoring six shots across the rinks leaving the final end to play on Robson’s rink whose team limited the Portadown four to one shot up on the end with their game finishing Lurgan 13 Portadown 18.

The Lurgan side kept their nerve on the last end to win 60 to Portadown’s 58. The home side won on two rinks and having the highest overall score the result was 5 points for Lurgan to narrow Portadown’s lead at the top of the table.