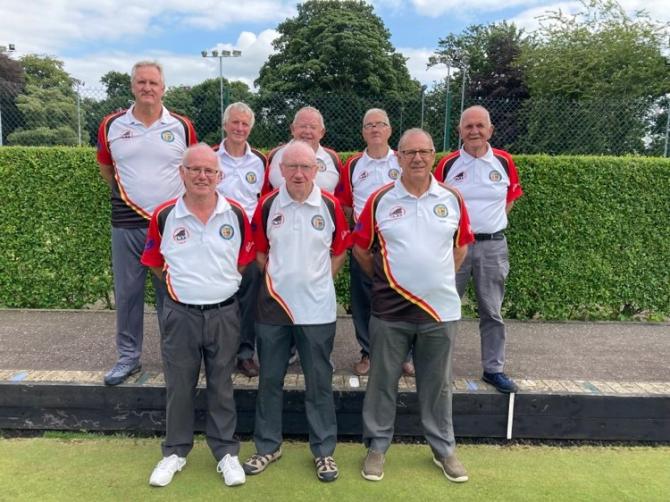 The Veterans' Lurgan 1 Team who won their NIVBL Section recently

Last Friday afternoon Veteran’s Lurgan 1 team had an outstanding 37-shot win at home to Warrenpoint in the 1st Round of the NIVBL Thornton Cup to see them through in style to a home draw against Ward Park Utd, Bangor on Friday, August 19.

Overjoyed and buoyed up by their Section 4 win, Robert Kennedy, Peter Ruffold, Peter Dew and Alan Briggs raced into an unchallenged 16-0 lead after 8 ends from which McLoughlin’s rink never recovered.

Two five-shot wins for Briggs’ rink on the 11th and 13th ends sealed the visitors fate for the Lurgan Four to run out magnificent 32-8 victors.

Although the Warrenpoint four clawed their way back into the game to be 1 shot short of the home four at the 14th end, Cosgrove and his team struck gold with a 4-shot win on the next end to enable them to win 19-14 in the end.

With the section already won Veterans’ Team, Lurgan 1 travelled to Dunbarton to complete their league fixtures for the season.

A similar scenario to last week’s game unfolded with Alan Briggs’ rink stretching and maintaining their lead to a constant 10 shots over the course of the game. This was mainly due to some great bowls from both Robert Kennedy and a Man of the Match performance from Peter Ruffold, both players peppered jack for most of the game frustrating a very good Dunbarton front end.

On the other rink Harry Cosgrove’s rink had fallen behind from the first end and struggled to compete with a very strong Dunbarton rink.

With the rinks balancing themselves out, the overall score turned in Lurgan’s favour but the gap was closing as we reached the last couple of ends. Both Dunbarton rinks picked up a single shot on the 17th end to level the score going into the last.

After the front ends had played their bowls Dunbarton were lying on both rinks. Declan McCabrey’s second bowl drew the shot but was only to be bettered by the Dunbarton skip. On the other rink Peter Dew going to mat three shots down promoted a Lurgan bowl for a close second so with just the skips to play Lurgan were down two shots overall.

Playing to a long jack, Alan Briggs pulled of another match winning shot by drawing right onto jack for the winner. On Harry’s rink he asked who had the best back bowl so it was going to be a drive. With his first bowl he removed the offening wood clean out of the head leaving Lurgan with the shot. The Dunbarton skip was unable to make a change and Lurgan finished 2 shots up overall to pick up 6 points.