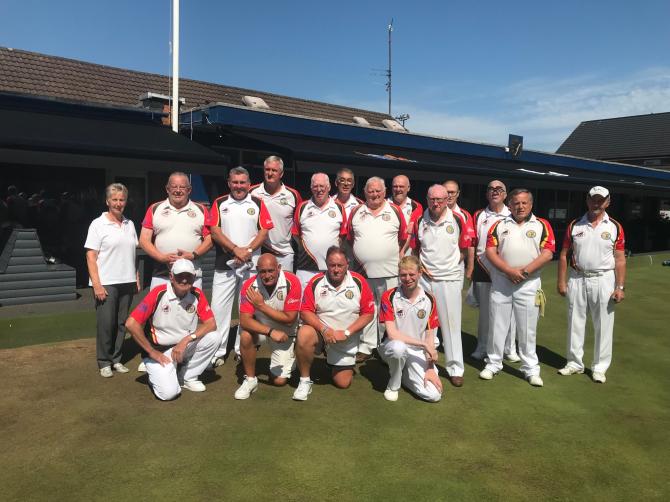 Lurgan’s A Team were certainly up for the challenge last Saturday at Belmont in the Irish Intermediate Cup Semi-final but fell short by just 12 shots against Ballywalter.

Peter McGrail, Luke Donaldson, Nigel Hamilton and John Gilliland put up a defiant show facing Simon Cavan’s rink to be 1-8 ahead at the halfway point. A sudden spurt by the Ballywalter Four took them into a 10-12 lead buy Gilliland’s rink did not give up. The sides were all square at 17-17 going into the last end but unfortunately the Lurgan four dropped a shot to loss 17-18.

Making a cautious start, they were 6-14 down against Alan Davidson after 8 ends due mainly to costly 5-shot and 4-shot losses on the 7th and 8th. McCombes motivated his rink who responded well to claw into the Ballywalter lead but a 4-shot win on the last end was not enough for loss by a slender 24-25.

Rink win on the day went to Dick McClune, Declan McCabrey, Harry Cosgrove and Alan Roberts against Gary Smyth’s on No.3. Roberts’ bowled well to beat the opposition 19-13 in a game that went all the way in Lurgan’s favour; leading from the first end to the 21st.

It was a tough run for Ivor Mitchell, Jeff McCullough, Alan Briggs and Ronan Cregan who all played exceptionally well only to face the Ballywalter skip, Ken Massey who could no absolutely nothing wrong on the day for his rink to run out 11-27 winners and ensure a place for Ballywalter against Mossley in the Cup Final on 27th of this month.

Commenting on the match, Irene Cunningham, 2022 Club President said: “I’m immensely proud of the Lurgan A team getting to the Semi-final stage of the Irish Intermediate Cup. They fought had throughout to try to secure a place in the Final only to lose by just 12 shots.

"The Officers, Members and I are very proud of their overall performance so far this season with the prospect of a trophy against Banbridge B in the NIBA Intermediate Cup Final on Wednesday week and only needing two points to be Division 2 winners and to be promoted to Division 1.”

Lurgan A move closer to promotion.

Lurgan travelled to Curran last Thursday evening knowing that a positive result would leave them in a great position to win the Division 2 title and what a win it was with visitors bring home 6 points.

Conditions could not have been more perfect for such an important match. Lurgan set off brightly and after 5 ends led by 9 shots due mainly to Sam McCombes’ rink ably assisted by Neil Sloan, Ian Ferguson and Peter Dew who had built up a lead of 8 shots, 8-16 against R Wallace. Sam’s rink ran out comfortable winners by 10 shots: 16-26.

Lurgan maintained their lead at 10 ends but unfortunately John Gilliland along with Peter McGrail, Luke Donaldson and Nigel Hamilton were up against it on Rink 1 with I Gingles having more than his fair share of luck to lead by 6 shots at 13-7. Things got no better for Gilliland’s rink who after 21 ends he ended up 14 shots down: 29-15.

Alan Roberts’ rink of Richard McClune, Declan McCabrey and Harry Cosgrove more than compensated by scoring heavily on Rink 4. They led 8-14 at 10 ends and over the second half of the game Roberts’ rink ran out winning by 16 shots:17-33.

This win puts Lurgan in a very strong position to win the NIBA Division 2 title. With two games to go only 2 points are required to secure the title and promotion to Division 1.