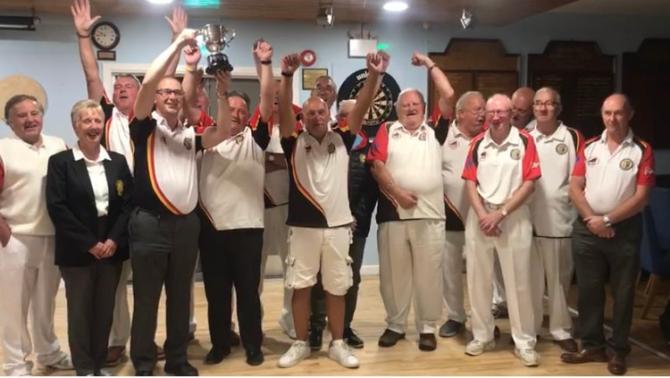 Jeff McCullough, A Team Match Secretary & A Team Captain holds the NIBA Intermediate Cup aloft in celebration of Lurgan A's win against Banbridge B along with Irene Cunningham, Club President and Neil

Last Tuesday evening on the Dungannon Green, Lurgan A beat Markethill in a tight match to win by nine shots and the NIBA Division 2 Title and the Ireland’s Saturday Night Cup.

It's the fifth trophy for the Club in three weeks with the prospect of more this weekend in the Women’s and Men’s Irish Championships; followed by at least one of the Veterans’ teams lifting more in the finals at Forth River on Friday week!

They only needed to get two points from the match to be Division 2 Champions but just as they have been doing all season, they did it in style with a convincing 5.5-point win over a very competitive Markethill side to clinch the title and gain promotion to Division 1 next season.

The team gelled right from the start and held fast throughout in the knowledge that the Championship was well in their grasp.

They maintained their lead throughout the match and were 6 shots up after 6 ends and 10 ahead after 12 with a strong finish seeing them through to a great win and the league title.

John Gilliland’s rink performed well to win 19-11 and Ronan Cregan’s finishing 22-19 up, with Sam McComb’s rink gained a half point at 13-13 and Alan Roberts’ fighting a losing battle be narrowly beaten 14-16.

He said: “I am delighted with his team’s brilliant performance all season who only lost two matches to finish Division 2 winners and promotion to Division 1 next season.”