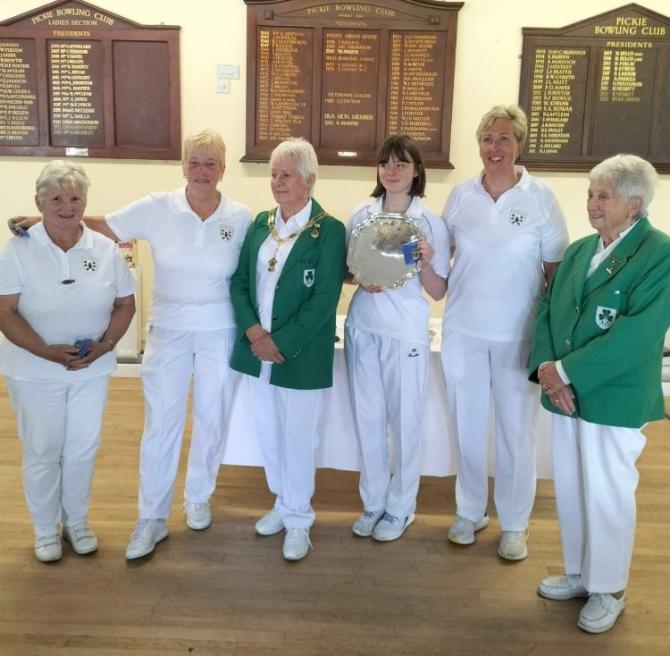 Last weekend was the Irish Ladies Championships on the Pickie Green, Bangor with the Lurgan Four & Senior Four involved in Semi-finals having qualified by virtue of their success in winning their respective Championships at Association level.

Unfortunately, they both had to brave tough conditions with the rain rarely ceasing all day.

In the morning it was the turn of the Lurgan Four – Mia Patterson, Elite Ireland & U18 International; Jennifer McVeigh, Doreen Wheelan and Eileen Robson to bowl against Anne McLaughlin’s Ulster Transport rink,

The Lurgan Four took command to lead 5-0 after 4 ends but as expected the opposition made inroads to reduce Lurgan’s lead to 7-4.

An excellent four-shot win at the halfway stage stretched Lurgan’s lead to 11-4 and quickly followed by another 4-shot on the next end pushed them further ahead at 15-4 after the 10th end.

Lurgan’s confidence was growing and were in form for a superb win. Single shots wins over the next 3 ends extended their lead to 17-5. Although they lost the next end there was no chance of an UlsterTransport comeback. Even though the Ulster Transport picked up four on the 17th the Lurgan Four produced a fantastic 20-10 win for them to breeze into the Final on the next morning.

Unlike the previous day the Fours Final was played out in glorious sunny weather when the Lurgan Four faced Cora Hamill’s CYM/LBL of Ireland rink for the Championship.

Robson’s rink bowled well to dictate the first half to lead 9-6 but misfortune struck on the 11th end when they dropped the full 8 shots for Hamill’s rink to storm into a 16-9 lead.

Robson’s rink were now in shooting distance to win the Championship. However, they dropped three shots leaving them needing four shots to at least take the match to a tie end but they could only muster two to finish 18-15 down in the silver position and the second best Four in Ireland in 2022.

Irene Cunningham, 2022 Lurgan Club President remarked that ‘the Lurgan Four should be very proud of themselves to have reached the Final and to have made a tremendous come back to be just five shots short of being Irish Fours Champions. She added her congratulations to them and also on behalf of the Lurgan Club members who were so pleased with their performance to end runners-up.”

In a rainy afternoon, it was the Lurgan Senior Four’s turn to face an experienced and determined NICS, Private Greens’ rink skipped by seasoned international Sandra Bailie and Linda Vance at two – another international with 11 caps to her name.

The Lurgan Four – Irene Cunningham, Genny Lyttle, Jennifer McVeigh and Eileen Robson - while getting some good shots into the head struggled somewhat with the soggy green but were holding their own to be down just 6-5 after six ends.

From then on the NICS Four played mostly a long jack which given the green conditions disadvantaged the Lurgan Four with Bailie’s rink taking 4 shots off the next end to go ahead 10-5.

Another 4 shots on the 15th end sealed the Lurgan Senior Four’s fate. While they fought bravely to win two of the remaining ends it was too late with them losing at the semi-final stage by 18-8.

Reflecting on the performance to even get to that stage in the Championships, the Lurgan Club President Irene Cunningham said: “It was great to even get to the Semi-final stage having become reigning NIWBA Senior Fours Champions and having faced some tough opposition in the earlier rounds to win through. They can hold their heads high.”