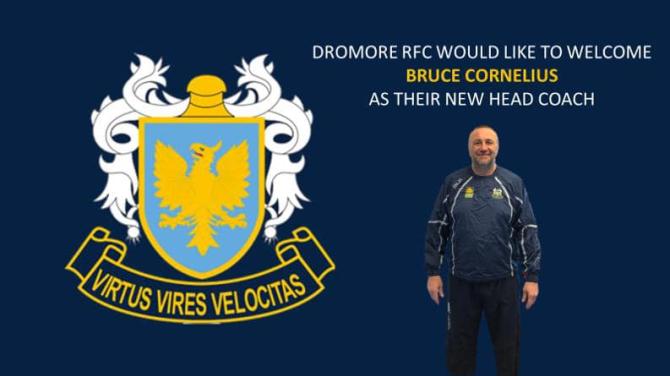 How Dromore Rugby Club welcomed Bruce Cornelius to the club on their social media pages.

Former Lurgan Rugby Club Head Coach, Bruce Cornelius, has taken over the reins at nearby Dromore.

And he says he is targeting winning the league title with his new club.

The side from Barban Hill have been progressing impressively over the past few years before Covid put a halt to almost all competitive rugby over the past 13 months.

And Bruce says he is impressed by the set-up at Dromore and hopes he will be able to provide the "new voice" which can help push the club to new heights.

The 52-year-old New Zealander comes to the club after a successful eight year stint with Lurgan.

During his time at Pollock Park Bruce led the club to two Gordon West Cups and promotion to Qualifying 2, with the team sitting pretty in second place at that level when COVID-19 hit in March of last year.

He told Your Lurgan's sister publication, The County Down Outlook, that he believed now was the right time to make a move.

And he added that he is eagerly awaiting getting started properly in July, regulations permitting.

“It's a really exciting role and I'm just keen to get started,” he says.

“On reflection I probably needed a new challenge. Reflection is a good thing and a challenge like this would really boost my enthusiasm.”

Bruce, who has signed a two year deal, says he believes the club will be searching widely for new players to add to the panel, with a couple of his former charges at Lurgan among potential targets, but he is keen to retain the largely local ethos which has seen Dromore go from strength to strength in recent years.

“I think the club will cast the net wide for new players,” says Bruce. “The club are quite ambitious.

“But one of the things that was emphasised was that it is a bunch of local guys and I think that's one of the strengths of the club.”