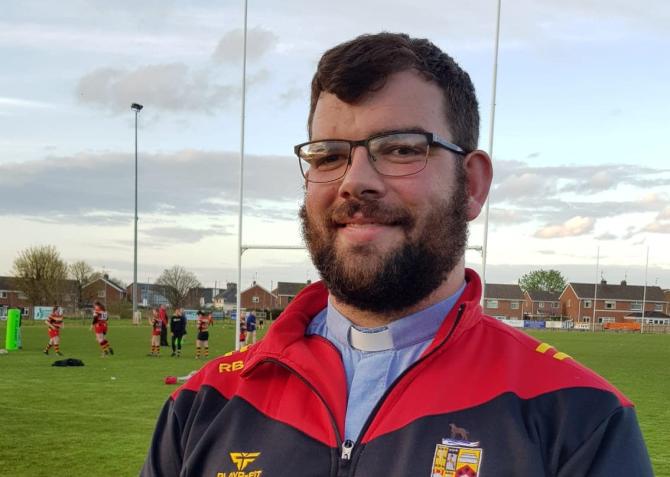 The Curate Assistant at Shankill Parish in Lurgan, Rev Rodney Blair, has been speaking about his new role as Club Chaplain at Lurgan RFC.

He will be supported in the role by a Pastoral Care Team of Peter Maxwell, Sandra McIlwaine and Andrew Davis. Sandra and Andrew have recently qualified as Mental Health First Aiders.

A former rugby player himself with Portadown, Rev Blair said he wanted to get involved in the community and so switched club allegiances to Lurgan.

“The pandemic and lockdown highlighted the vital role played by clubs in supporting the lives and wellbeing of their membership,” he told the Diocese of Down and Dromore’s website.

“[Lurgan] recognised the importance of positioning themselves alongside players to support them in times of difficulty and this led them to set up a pastoral care team headed by a chaplain. I was appointed by the Club Committee.

“Sport has been a huge part of my life since childhood and I feel privileged and excited about being able to support sports players in my local community through the role of Chaplain.”

Rodney comes into the role with a degree in Youth & Community Work with JNC while he completed a micro–counselling skills course along with pastoral care and mission modules. With the listening and signposting skills involved in ministry he was an ideal candidate for his new role at Pollock Park.

“Ministry is a calling where the learning never stops so I hope that I can develop these skills further as I take on the role of Chaplain,” he added.

“During the rugby season I will continue to train and play as normal with the senior squad. I hope to support at matches when I am not playing and be around the club on Saturdays too.

“I am a ‘people person’ so it is natural for me to spend time getting to know others and this will be a big part of the role. I hope this will allow me to form good relationships, to follow up with those who are injured or anyone disappointed that they didn’t make selection and to check in on family issues, bereavements etc.

“The Chaplain is the visible head of the pastoral care team and may have matters referred to them by members of the club. I hope to be a listening ear to offer support in a confidential manner along with other duties as directed by the club management.  This will, like any pastoral role, differ from week to week and I will rely on the pastoral care team to support me.”

The members of that pastoral care team have been around the club for quite some time and know it, and more importantly its members, inside out.

That link will form an important part of the chaplaincy, explained Rodney.

“We want to be a team who are visible and available in times of crisis, and to be a non–judgemental listening ear to those of all faiths and none. Two of the team are Shankill parishioners but it wasn’t essential that they had to be involved in our church.

“The pastoral care team are there to support the health and wellbeing of all the club members as well as myself. Their role is to speak to people and organise events to get folks together to help encourage good physical and mental well–being.

“Importantly, they will ensure all referrals are dealt with in a timely manner and medium to long term support measures are in place when required. They will assist with any wellbeing initiatives offered to the wider club membership too.

“We have recently launched our first initiative in connection with Craigavon Area Foodbank. We have asked the club members from all teams to support a food collection over the coming weeks which will then go to the local foodbank for distribution in our area.”