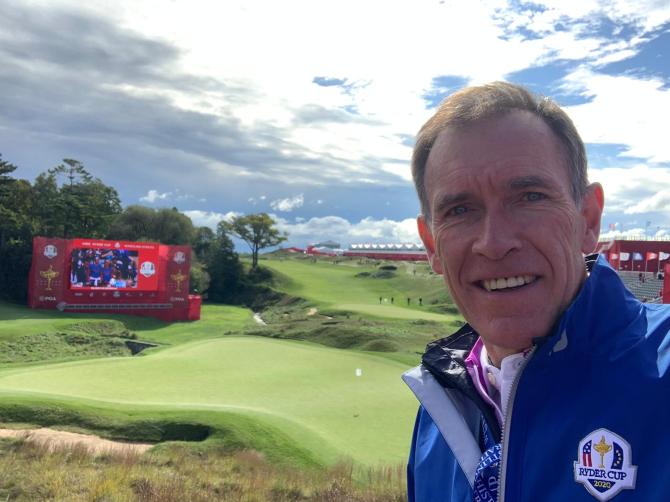 Peter Hanna pictured at the 9th and 18th greens at Whistling Straits.

Going to the Ryder Cup is on the bucket list for many sports fans – but the Head Professional at Lurgan Golf Club has spoken of his amazing time at his SIXTH event.

Peter Hanna swapped County Armagh for Wisconsin two weeks ago as he attended the 43rd edition of the Ryder Cup at Whistling Straits.

The Lurgan native – who was only the third Irishman to be PGA Captain of Great Britain and Ireland from 2019 to 2020 – outlined the stringent safety measures put in place before travelling across the pond.

“As PGA Captain of Great Britain and Ireland in 2019 to 2020 and the fact the Ryder Cup was put back a year due to COVID, I was invited over,” he said.

“I have been to a number of Ryder Cup events before and it is always an excellent tournament and this one was no different.

“The only change was the major operation in getting there as I had to do a COVID test to get into the hotel in London, before having another PCR test in the hotel airport and waiting for the result before the chartered flight to the States.

“Five of the team were on the plane, including the Captain Padraig Harrington, so we were all praying for a negative result.

“We flew into Milwaukee and played against PGA America which is always good fun and then went to the course and had a look around.

“We were up at 5am every day to travel to the course, there were functions to attend and we were always on the go, so it was a busy but enjoyable week.

“It was a wonderful spectacle throughout and the crowd plays a huge part. The fact there were no Europeans there did take a way a huge part of it.

“When I came back home there were reports about a small number of American supporters being disrespectful but it wasn’t really that bad because if you had Europeans in the stands, then you probably wouldn’t have heard the majority of the comments.

“We were treated extremely well throughout and it was a great occasion to be a part of.”

Peter, who played on the European Tour from 1979 to 1981, had the honour of being an observer on the final day as Bryson DeChambeau and Sergio Garcia went head-to-head in the singles.

The former PGA in Ireland region captain in 2000, also reflected on just how difficult the course was as America regained the trophy with a record 19-9 victory.

“The course was just magnificent and extremely difficult,” Peter continued.

“I had a birds-eye-view of some of the tee shots and you needed to be playing at a very high level off the tee to have a chance.

“Most of the American team were in the top 20 in the world and the Europeans not too far behind or in amongst that, and trust me, you needed to be to play on that course.

“Europe got off to a poor start on the Friday and there was a long way back after that. Even on the Saturday, I think they lost the foursomes in the morning and it was an uphill struggle from there.

“The Americans did their homework, they had more practice on the course and seemed to gel better as a team as the week progressed, which are all the fine margins that you need when you play in an event like that.

“I was an observer on either side of the fairway for the DeChambeau vs Garcia singles match on the Sunday and the standard of golf was magnificent.”

Peter – who has been Head Professional at Lurgan Golf Club for over ten years – revealed that there has been improvements on the course in recent months.

“The course has been in wonderful condition,” said the former club professional at Fortwilliam Golf Club in Belfast.

“There has been course improvements over the summer such as bunker reconstruction and new open drains across the 1st, 9th and 18th holes.

"There will also be ongoing work over winter which includes improvements on the tee boxes, drainage work and altering tree positions.

“We now have a waiting list for membership but we will be expecting an influx of new members when others can’t commit.

“Despite being extremely busy at the weekends, I believe we offer a very fair rate and availability throughout the week for non-members.

“We also have a 12-bed driving range which is open to the general public.”