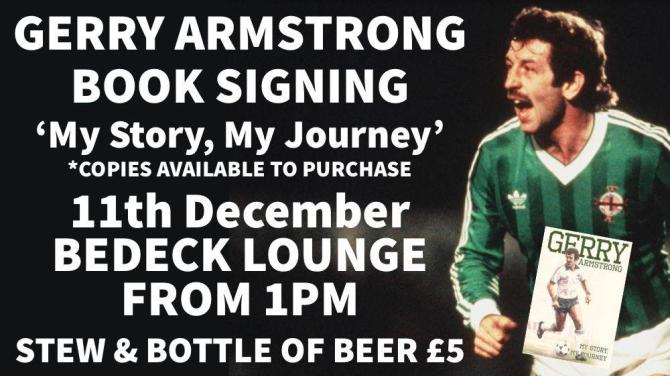 Former Northern Ireland hero and Glenavon striker Gerry Armstrong will be signing copies of his new book at Mourneview Park on Saturday afternoon.

The 67-year-old will be in the Bedeck Lounge from 1pm prior to the Lurgan Blues' clash against Coleraine - with copies of the book available to purchase on the day.

The legendary Northern Ireland striker and World Cup hero tells his amazing life story in his new autobiography in ‘Gerry Armstrong: My Story, My Journey’.

The book was launched just over a week ago and recalls how Gerry was brought up amidst the Troubles, as a rising star in Gaelic football and hurling.

However, Gerry found his niche when football came calling in his teens. A move to England followed, a goal in Valencia changed his life and a gift for commentary took him all over the world.

From being locked up in Holywood to getting the freedom of the Bernabéu, via Best, Maradona and Elton John, nobody tells a story the way Gerry does.

If you're need in of refreshments, supporters can avail of a stew and a bottle of beer for £5.