Christmas made for Hamilton 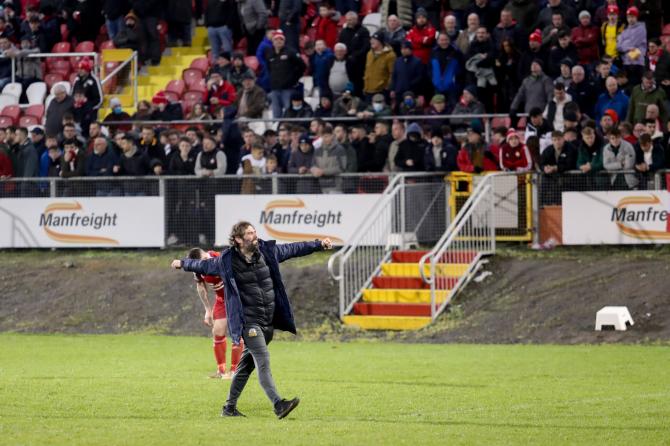 Glenavon manager Gary Hamilton believes yesterday's win against Portadown was "a landmark" achievement by his players.

The Lurgan Blues ended a 54-year stint of not having won a Boxing Day fixture at Shamrock Park as Peter Campbell's goal was the difference in the festive derby.

The victory was made even sweeter as Glenavon had to play around 55 minutes with nine men after the dismissals of Campbell and Robbie Garrett in the first-half.

However, Hamilton was quick to praise the vocal support from the club's 12th man as Glenavon fans celebrated a late Christmas present.

“The fans were outstanding from start to finish," he told Glenavon Media.

“The boys needed them in the second-half as we needed that drive and support as we had to play 55 minutes with nine men.

“We got that from the fans, they were amazing to a man and I’m proud the boys could deliver the result as it’s been a long time coming.

“54 years is a long, long time to not have won a Boxing Day game at Shamrock Park but the team who played today will be remembered now because it’s a landmark in terms of the length of time we haven’t won.

“It was something that hurt me and I was sitting on Boxing Day wondering when the last time we won at Shamrock Park and I genuinely couldn’t remember.

“It’s frightening to think during my time as a Glenavon fan, I’ve never seen the club win on Boxing Day at Shamrock Park.

“That victory means so much to me – the boys done the club proud, done themselves proud, the supporters proud and they made me very proud today.

Hamilton gave his verdict on the two red cards but stated that his Christmas was made when Keith Kennedy blew the full-time whistle.

“Peter’s isn’t a red card in my opinion," he added.

“Ribsy gives the referee a decision to make.

“At the end of the day, they were both given and it left us with a difficult task of playing with nine men in a derby game.

“However, they were all superb to a man, it’s made my Christmas as I’ve followed this club for a long time and to be the manager who won here is a great feeling and something that will still with me like the Irish Cup wins."

Hamilton confirmed after the match that he is looking to add his squad during the January transfer window - with one new addition already secured.

“We are always looking for players as you’re constantly wanting to improve your squad," he continued.

“We have made one signing which hasn’t been announced yet and that’s Conor Scannell from Cliftonville.

“He’s a young player and everyone knows I like to work with young players that have promise and he’s been training with us in the last month or so.

“He has shown a lot of promise, he has a lot of talent and we want to nurture him into a player like Mark Sykes or Bobby Burns.

“He’s still a kid but from what I’ve seen, he has amazing ability.”