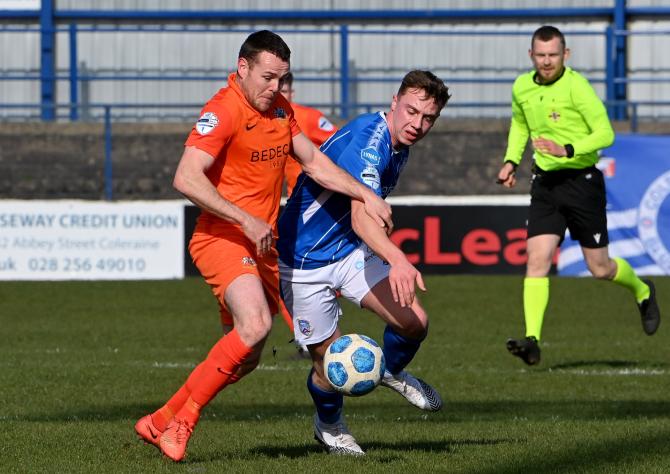 Glenavon have announced that utility man Aaron Harmon has departed the club.

Ex-Carrick Rangers and Glentoran man, Harmon, joined the Lurgan Blues in 2018 and featured in a number of positions for Gary Hamilton's side during his time at Mourneview Park.

However, his game time was limited this campaign and the 32-year-old has moved on to pursue more first-team opportunities elsewhere.

Speaking to Glenavon's official website, boss Hamilton admitted he was emotional when the pair agreed to part ways.

"I’d like to thank Aaron Harmon for all his service since he joined. He joined us after a cruciate at Glentoran and they didn’t give him an opportunity in pre-season, so I jumped at the chance to bring him in because he’s a player that we tried to sign before he signed for Glentoran. He’s someone I’ve really liked as a player and his versatility was something that appealed to me and obviously with the budget that we work with, you like to have players that can work in so many positions. Harmo did that for us quite regularly in terms of playing right back, left back, centre half, centre midfield and he even played right wing for us one day.

"We got a lot of quality from him but the one thing that separated Aaron from a lot of players that we’ve had at the football club is his professionalism. His attitude was second to none. I’ve always said to him that if he wanted to be at the football club he could be here because he’s one of them lads that you love working with. I know I speak on behalf of the rest of the coaching staff, the Chairman and the players.

"Last week when he asked me could he move on because he was starting a job in England over the next couple of weeks, he thought it was probably time to look for a new club and reluctantly, I mean very reluctantly, I agreed to it. The reason I agreed to it was because of my respect for Aaron. He hasn’t played as many games this year and to be fair he has been that much of a model professional, there was no way I was going to stand in his way of playing football at his age. He wants to enjoy the last few years that he’s got left. He knows how much I would’ve loved to have kept him, I had to do the morally right thing and appreciate where he’s coming from.

"He hasn’t played as much game time as he would’ve liked to, and he hasn’t given me one bit of bother. He has come to training every night and sets a standard in training and young players look up to that. He’s worked his socks off yet when he’s come in on a match day he hasn’t sat and moaned or groaned or huffed on the bench. He has sat encouraging other players, encouraging the team to win and its few and far between finding someone in football like that these days. That and his ability is why I liked having him around the club.

"I remember the goal he scored against Linfield when he played centre midfield and there’s so many other highlights with Harmo as well. He was part of our European adventure as well.

"I have really enjoyed working with him and people will know by the way I’m speaking about him that I’m emotional. I was emotional when he said it to me. He’s one of them people I have a lot of time for. I’ve told him to keep in touch. He’ll always be welcome back at Mourneview Park while I’m around and he can come in and have a drink with the boys or the staff because I know that every single one of us at the football club appreciated Aaron.

"We announced it last week and I think when all the players stand and clap their hands and go over one by one and shake his hand and wish him all the best, it shows you the respect that he had amongst the group.

"I wish him all the best in the future and we hope he goes and gets football and enjoys it. He said to me it was the best four years of his football career, at Glenavon Football Club. I would just like to put on the record my thanks and respect for Aaron."