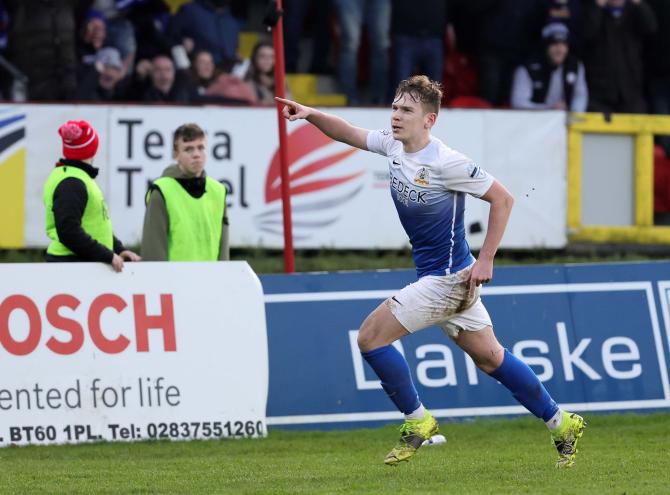 Glenavon's Peter Campbell insists he has been lucky to work with two excellent managers throughout his senior career.

The tricky winger was nurtured into the men’s game by Loughgall manager Dean Smith before being given the chance in the top flight under Gary Hamilton at Glenavon.

His rise as one of the top players in his position shows hard work and dedication pays off as the 24-year-old felt disillusioned with the game after being released by Portadown at youth level.

“When I was younger, I was with Portadown and then at Linfield for five years,” he told the Northern Ireland Football League.

“I went back to Portadown at the age of 18 to play at Under-19 level but unfortunately I was released.

“Stephen Hawe phoned me who was the manager at Loughgall at that time and I decided to go there as I needed to get experience.

“To be honest, I probably wasn’t playing much at that time and then Dean Smith came in from Annagh United and played me almost every week.

“It was a breath of fresh air having that trust from a manager and I remember he started me in his first game away to Annagh but I probably developed and kicked on in my second and third season.

“Playing in the Championship was definitely worth it as I didn’t want to play football after being released by Portadown as I felt I had no direction.

“However, Loughgall gave me that chance and it paid dividends as you need experience in a men’s league and it really helped me.

“I owe a lot to Loughgall and Dean in particular as they were brilliant to me.”

With a host Premiership sides chasing his signature, Campbell would make the move to Mourneview Park at the beginning of the 2020/21 campaign.

His debut season in the Danske Bank Premiership would prove a profitable one as he scored six times and accumulated 14 assists, earning a new three-year contract in the process.

“Once Glenavon wanted to speak with me, I jumped at the chance because it is local to where I live, Gary has faith in young players and it was the next step in my career,” he added.

“One of the things I liked about Gary was his patience and understanding regarding young players and he has helped the likes of Bobby Burns, Mark Sykes and Joel Cooper get moves across the water.

“At the so-called ‘bigger teams’, if you have a bad game, you would be dropped for a few matches, but Gary has patience and trust in his players and hopefully I’ve been able to repay him so far.

“As a winger, you want be as consistent as possible as I had plenty of assists last season and not many goals, but it’s probably been the opposite so far this campaign.

“It was a bit of a surprise being offered a new contract in the summer but it was fully appreciated and makes me want to pay back Gary’s trust.”

Whilst Glenavon’s chances of securing silverware has been ended in the Irish Cup and League Cup, a defiant Campbell acknowledged that the Lurgan Blues still have a European play-off position to battle for.

The Portadown native remarked that he has been like a sponge in relation to getting advice from the experienced players in the squad.

“It has been disappointing to exit the Irish Cup in the first round two seasons in a row,” he continued.

“We know we can beat anybody on our day and the European play-off places are still up for grabs.

“The likes of Ballymena United and Coleraine are just above us in the table but we need to beat the teams in and around us in the table and take as many points off those who are near the top.

“We have so many experienced players in our squad like Sean Ward, Andrew Waterworth, Mark Haughey, Robbie Garrett and Michael O’Connor, and I’m constantly watching how they train and play.

“When they’ve won as many trophies as they have and played at the level that they have, it would be foolish not ask for advice and it certainly helps you when you’re trying to develop."