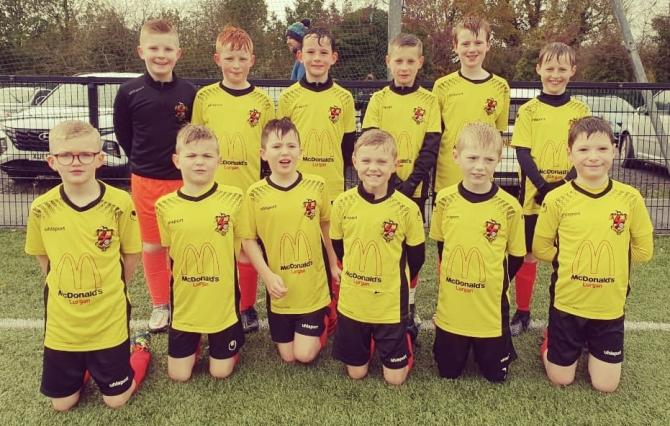 After last week’s narrow defeat against Markethill, Town's 2012 Predators bounced back against Dungannon Colts, to secure another win in the MUYL League Cup.

Having the game moved from a Saturday morning to a Thursday evening, allowed the boys to play their first game of the year under the spot lights at the Lurgan Town Arena.

Town started the stronger of the two teams and had Dungannon under a lot of pressure on the opening 15 minutes, but couldn't find the back of the net, as the Dungannon defended brilliantly.

Fortunately for the Lurgan Boys, the intense pressure paid off and 10 minutes from half time, a well worked spell of passing down the left hand side between Jamie Cunningham, Eli Hawthorne and Jamie McKernan provided a through ball for Lucas Moore who calmly slotted home to make it 1-0.

Not long after this, and just before half time, another passage of play in the middle of the park, resulted in Jamie Cunningham making a second defence splitting pass, allowing Lucas Moore to run onto the pass and place the ball into the bottom right hand corner of the goal.

The second half saw Dungannon come out of the blocks quickly and they pushed Lurgan to the wire, but fine defending from Olly Roney, on multiple occasions, kept the Dungannon attack at bay.

Lurgan did have further chances of their own in the second half, but luck was not on their side.

This game allowed the boys to put in two solid back to back team performances against Markethill and Dungannon respectively. Attention now turns to next week when we take on Castlecaufield in our last group game of the MUYL League Cup.