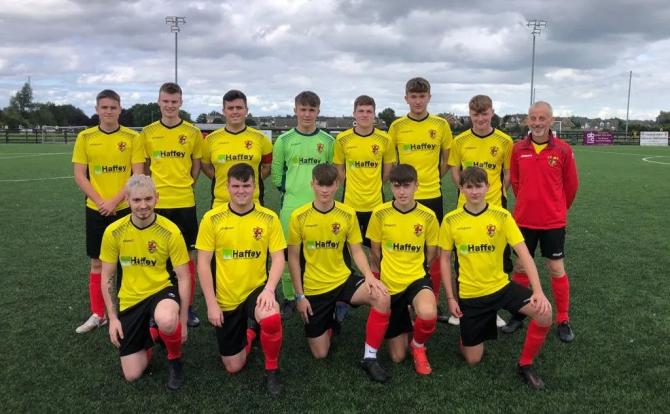 A strengthened Swifts squad went into their last home league game of the season needing the three points. Their opponents on Saturday were Lower Maze who sat a few places above the Swifts.

The first 30 minutes seen both teams cancel each other out with the best chance falling to Ashley Gregg. Lewis McKinley's free kick into the penalty area eluded everyone on its way to Ashley but unfortunately he missed the chance to tap home. Then in the 31st minute a clumsy challenge by Chris Agnew give the ref no option but to award a penalty. Scott Shellard saved the penalty but the rebound was scored.

At this stage Lower Maze were on the front foot but on the 40th minute the Swifts got an important equaliser. Matthew Johnston collected a loose ball which he played a good pass to Ashley Gregg who scored a 20 yard shot past the keeper. On the stroke of half-time the Swifts took the lead when Lewis and Matthew Wells linked up with Matthew crossing in for Andrew Houston to score at the second attempt.

An enforced change during the break saw Adam Leathem replace the injured Lewis McKinley. The Swifts also changed formation and within five minutes of the restart the Swifts were 3-1 up after Ashley Gregg played a defence splitting pass to set up the hard working Callum Watkins to score with a good finish.

On 55 minutes, Lower Maze defender handled the ball in the box plus received his second yellow therefore sent off. With Lewis off the pitch, Andrew Houston took responsibility of taking and scoring the penalty. The Swifts kicked on from this moment with Housty getting his third in the 60th minute via another Ashley Gregg pass.

Ashley was replaced by Spencer Young and Ryan Blacoe was replaced by Jamie Trainor. A small blip in the 65th minute allowed Lower Maze get their second despite the player being five yards off side. However, four more goals followed for the Swifts in the last 15 minutes of the game.

The sixth was a great individual effort by Matthew Johnston as he collected the ball in midfield, raced towards the goal and finished with ease. Two minutes later, Housty got his fourth of the game after a super pass from Callum Watkins. Both players had missed great chances to score not long after.

Although goal number eight arrived in the 87 minute this time Housty flicked a header onto Spencer Young which Spencer hit a beautiful half volley past the keeper from the 18 yard line. The final and goal number 9 arrived one minute later when Callum won the ball to get his second goal of the game to make it 9-2.

What’s been a tough season for the Swifts it was great to finish with a convincing home win to boost the teams chances of staying in the league. Defensively the team were solid with Marcus Smylie marshalling the defence with his experience. Young Krissy Cassells performed well beside Marcus. However, the joint players of the day went to Matthew Johnston for playing through discomfort of damaged ribs he typically played with tenacity and composure and Andrew Houston with scoring four goals.