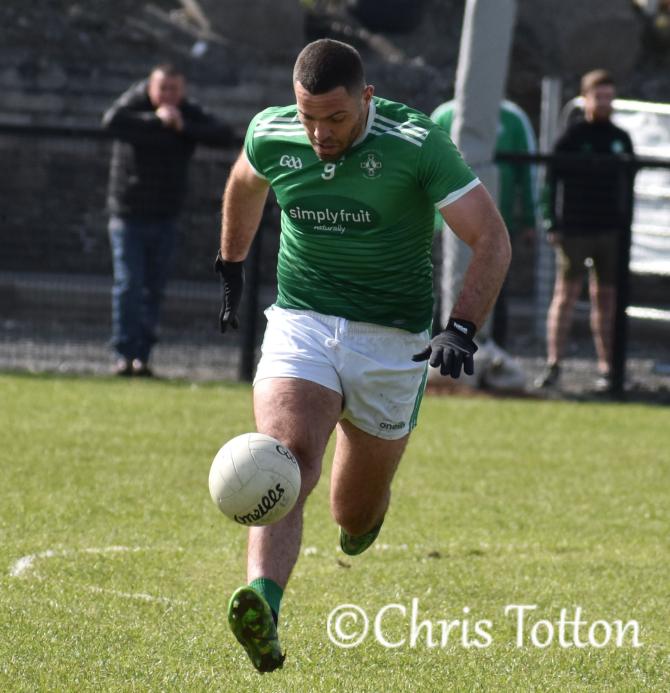 Johnny McCarron made a second-half impact

Considering Wolfe Tones' "horror show" against St Paul's recently, they appeared to bring that form into last evening's big derby with St Peter's, at least for the opening half where they ran into tackles, lost possession and missed a bag full of chances with half hit efforts.

However, in a rousing second period despite losing the influential Jamie Haughey with a red card, they took control over table toppers St Peter's to win on a 1.11 to 0.12 scoreline thanks to a superbly worked Chris McCarron goal on the third quarter and a virtuoso striking performance from Odhran Magee, who struck 5 points in a row in the dying embers, one particular effort was a Maurice Fitsgerald classic from under the grandstand.

There was no grandstand finish from the visitors who knew they were in a game from the throw in. It was clear they badly missed midfielder Ciaran McCavigan, young James Moore and talisman up front Niall McConville who is county tied, they also lost keeper Conor Keegan with a nasty looking ankle injury in the opening period and had a penalty shout at the death waved away by referee Brian Carville who is a top official.

It was the introduction of the superb Johnny McCarron (pictured) and the peerless Ryan McQuillan in the second half which proved crucial and a master stroke from Cash boss Peter Nugent.

With former Clann Eireann manager Tommy Coleman supplying pitch side analysis, the first half brought the notion that we had picked the wrong game, the Whites looked edgy but appeared to be in control.

Niall Creaney, Emmett Haughian and Oisin Ginessi who all had a good opening period set the standard for the free crow side as the Tones, lost for ideas and accuracy depended on set pieces from Jamie Haughey and a very good outing from Connell O'Hagan.

Although the strikers will always make the headlines, the winners' best player over the hour was Paudie Judge, who was involved in everything and had a superb outing.

With a reporter mulling over what to ask the Whites boss about the victory and his side 8-3 in front after 40 minutes, the Tones struck 1.08 to their opponents 0.04 in the last quarter, invented initially by McCarron's goal, following a superb move and a jinking run by Mc Quillan.

It should be said that young McAlinden up front had a good game for the Whites, with Sean O'Neill rarely putting a foot wrong.

The dull first half gave way to a titanic battle in the second period, Jamie Haughey's loss seemed to sound the death knell for the home side, before a double substitution, McCarron's goal and Magee's brilliance from all angles took the roof off the stand on the final whistle.

Following the St Paul's debacle, the Tones still have a long way to go, but at least now they know where they are going.