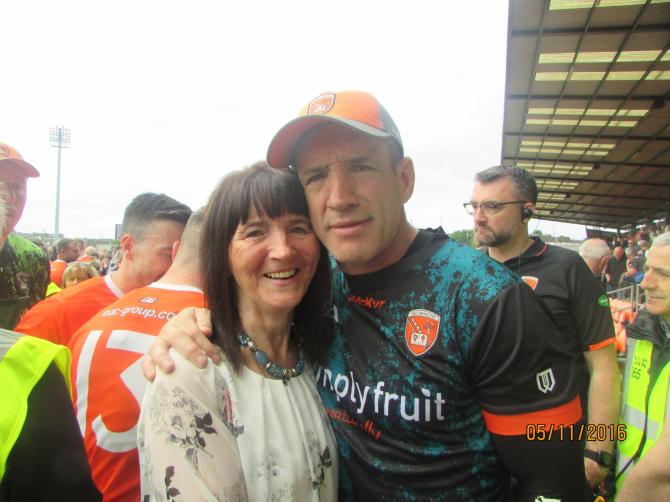 Kieran McGeeney pictured with his mum Bridget at the final whistle.

Armagh put themselves back in the All-Ireland race following a very impressive win over All Ireland champions Tyrone today at the Athletic Grounds.

Previously under fire team boss Kieran Mc Geeney (pictured) in a memorable moment with his mum Bridget on the final whistle may have had a lot to prove following the defeat to Donegal, but tomorrow's draw will be a new excitement for Orchard fans who witnessed a deserved win over the Red Hands.

Supporters will be hoping for good news around the well being of Ciaran Mackin who was stretchered off near the end, but the ability of both Tiernan Kelly and Niall Grimley shot Stefan Campbell directly into the spot light, on a day where the Clan's player probed, created, and was generally unstoppable in a man of the match performance.

Andy Murnin considering his short time on the field of play was sublime, winning his own ball and striking over a brace of points to supplement the dash and athleticism of Conor Turbitt who impressed.

Tyrone, fumbled, stumbled sand finally crumbled, not for the first time this season they looked flat but in fairness this may have been Armagh's best defensive display under boss Kieran McGeeney.

Aidan Nugent's goal in the opening period following a superb end line run, punished the visitors who missed a bucketful of chances after Conor McKenna had run through the home defence to blast home the visitors only goal of the game.

With the much-vaunted Ruan O'Neill only hitting one point from open play, the Rangers man was at his best when dropping deep to allow Murnin and Turbo room up front.

While it was a day for the Armagh strikers, it should be said that the keeper "sweeper" role employed by Ethan Rafferty who crashed over two superb points on the run, was one of the highlights of a game which in the first period was in fairness a bore fest brightened only momentarily by the announcement that a car had been left with its engine running and the keys in the ignition in the car park.

The former champions could have struck for a second goal as Michael O'Neill had an effort cleared off the line by Rafferty in the Armagh goals.

In the second half however and even considering the 9 minutes of added time, the Tyrone fans fell silent as Armagh registered a hat trick of wins over the Red Hands this season.

Looking for heroes, Aidan Forker and James Morgan were sublime in a defensive display matching anything seen this season. Apart from the goal, Tyrone only scored two points across all 6 starting forwards, Richie Donnelly and Kieran McGeary made little head way in the dying minutes, as McGeeney's outfit ran out convincing winners.

They were composed and stronger as the game ebbed to a conclusion. There was doubt in some quarters about the Armagh midfield, but Ben Crealey and Stephen Sheridan certainly did their reputation no harm as the Sam Maguire series hots up.