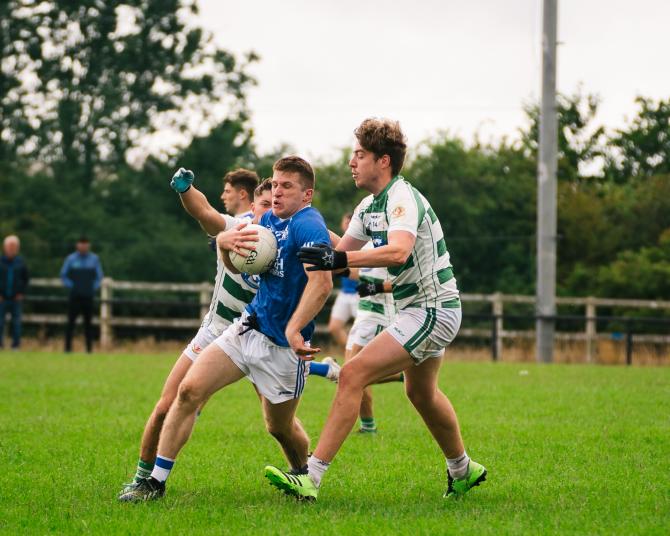 Tomorrow night's Clans v Sarsfields game will have quite a bearing on the promotion race for the rest of the league.

Although still outsiders at this point, Clans' win against Mullaghbawn on Sunday brought them within touching distance of the pack. If they can beat Sarsfields and Silverbridge in the coming weeks, their other fixtures look winnable too.

For Sarsfields, things are simpler - at least mathematically. If they can beat Clan na Gael, the Blues will effectively be out of the running. From there they have winnable games against lower sides.

In all scenarios, the North Armagh sides need Mullaghbawn and Silverbridge to drop points. Considering they each have league leaders Ballymacnab to play, and have not been hugely consistent either, it's more than a theoretical chance that one of Clan na Gael or Sarsfields could join the top table in 1A for 2023.

The Trasna outfit wont be given any time to lick their wounds by boss Brendan Hughes following the defeat to The Nab last Friday, a game which incidently the hoops lead before being overhauled by the champions elect in the dying minutes.

Young Calum McGibbon, who looks classy in the absence of Caolin Skelton did well in the middle, and looks to have huge potential. Some of the lesser known stars like Shane McAlinden also stood out, but most teams would struggle without the now retired engine room player Brian Lavery and Paul McGaughey, who is one of the most underrated players in the league will probably lead the attack.

Furthermore, Kevin McAlinden is known for delivering in big games, Thomas McAlinden is a contender for player of the year, as is the ultra-consistent Niall Kerr.

For the Blues, the return of Stefan Campbell has brought stability behind play maker and skipper Niall Henderson, Dairmaud O'Hagan has returned to the centre of defence with new energy being supplied on the wing by Michael McConville.

Up front Shane McParland is a constant threat with the Loney brothers progressing at a rate of knots. Recently the Sarsfields have held the edge in this particular North Armagh derby, but the Francis Street side on this occasion may have more strength in depth. Irrespective about promotion prospects neither of the sides will be contemplating defeat.