Sensational win for Lurgan B on the Park Green 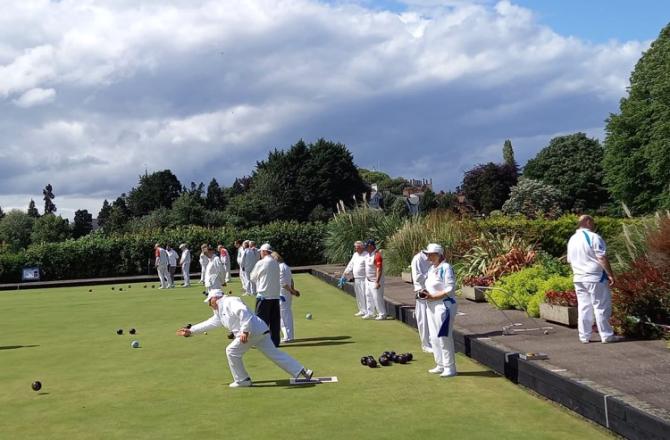 Action from a recent Lurgan B match.

Lurgan’s B Team made an excellent weekend recovery after their defeat at the hands of Newcastle last Wednesday evening, beating the strong Irish Junior Cup 2022 Semi-finalists, Warrenpoint by 14 shots to move them up to 9th place in the NIBA Division 3a.

Starting off with a brilliant 7-shot win on the very first end Parr and his rink never let the Warrenpoint into the match to be up 19-8 on the 12th end.  Stretching their unassailable lead to 25-12 after the 17th end, they finished with an excellent 27-15 win that ensured an overall victory for Lurgan B on the day – a great afternoon’s work.

On Rink 2 Albert Houston, Simon Maguire, Mel Hamilton and Charlie Maguire were somewhat unsettled during the first 8 ends to be down 2-12 to Dominic McAvoy’s rink but they turned things round with double shots on 9th and 10th ends and 2 and 3 shot wins on 13th and 14th ends to be within two of the visitors.

On the 16th end the whole Lurgan B rink bowled magnificently to take 5 winning shots and shock the opposition to take a 16-15 lead for the first time in the game. It was all square at 17-17 after 18th and it was all to play for with the visitors going 17-18 ahead. The Lurgan four kept their nerve to draw double and single shots on the last 2 ends to slip home by 20-18 – another vital league point.

John Murtagh, Robert Colhoun, Brian Fitzpatrick and Peter Ruffold performed well on Rink 3 to keep ahead to after the three-quarter stage. Ruffold’s rink dropped a couple of shots on the 16th but they did well to pick up 4 shots on the next end and take the lead by 15-12. The Warrenpoint rink won the last 2 ends with Ruffold’s rink squaring at 16-16.

On Rink 4 Stephen Poots, Gerry Devlin, Robert Kennedy and Eamonn Quinn battled hard throughout their game to be well ahead by 12-7 after the 13th end and 14-9 after 16 ends. McGuigan’s rink struck back but the Lurgan four still held the lead going into the last only for the visitors to take the last end by 2 shots with the Rink 4 game finishing 16-16.

Two rinks tied at 16-16 and wins on the other two gave the Lurgan side and excellent 6 points on the day which was an excellent team effort.

Next Saturday after Lurgan B are off to Lisburn to play Lisnagarvey B and are hoping for another win to raise them out of 9th place.