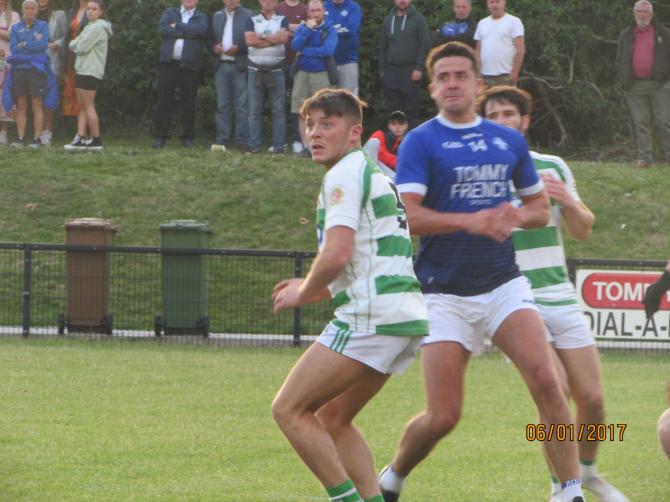 Clan Na Gael have promotion to the top flight of Armagh football in their own hands following an emphatic win over Sarsfields last night at Davitt Park.

Stefan Campbell's goal 10 seconds after the break which was described by former Clann Eireann boss Tommy Coleman as "straight out of the training ground", killed the game as a contest.

Not all derbies live up to their expectations, this one looked to be on track, but with the visitors fading following a lively start the "burst" from the Blues each side of the break, after they took the lead for the first time brought a reward of 2-06 without reply.

The Trasna outfit who had promised to challenge for inclusion to the top flight after beating "Pat's " away, and running The Nab close, looked leggy, and before the end of normal time had only registered four times from play until Tommy McAlinden with a bullet and Eamon McGeown found the net to put a veneer on the score line.

McGeown saw his late penalty strike scream past the left hand post in the final action of a forgettable evening for the Hoops.

Sarsfields ratings barely rose above the average, earmarked for an 8, young Calum McGibbon, who was pacey, rangy and productive and he could be top drawer, although it was as surprise to see him hauled ashore.

Aaron McCreanor was superb for the winners, holding the fort at the back and immediately joining the attack down the flanks, the man who really caught the eye was Michael McConville, whose energy along with the panache of Michael Toland prised open the Trasna defence.

Toland hit his sides concluding goal after Campbell and Camara put the game beyond Brendan Hughes' side.

Without several regulars in including their captain Niall Henderson, the Clans have a very strong bench, bursting with youth an vitality, Jamie Bradie, one of the most underrated players in the league was the best defender on show.

The derby which essentially was "a flop" as far as the neutrals were concerned, brought a sense of reality to Sarsfields, and a learning curve to Clan Na Gael, the Lurgan side are much improved, the championship will illustrate how much.

Missing out on promotion may not exactly be a disaster for Sarsfields.