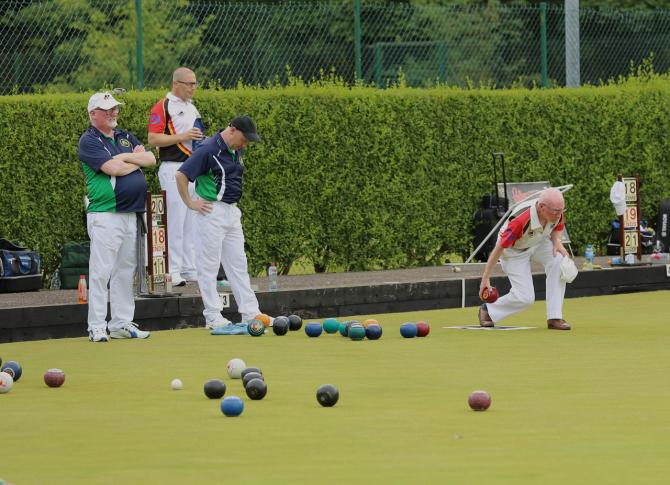 Ivor Mitchell bowling for Lurgan A during the recent Irish Intermediate Cup Quarter Final on the Park Green.

Hoping for a win to keep their place at the top of League Division 2,Lurgan A travelled to Bangor last Saturday to play Castle and were buoyed up with their midweek colossal 83-shot win over Bessbrook. The match proved to be more difficult than anticipated and only a strong finish over the last few ends secured a victory and a welcome five points.

On Rink 1 Dick McClune, Declan McCabrey, Harry Cosgrove and Alan Roberts were up against N Poots. Alan started strongly and was never behind in the match. At 10 ends they led by 7 (7-14) but this was reduced to 6 (12-18) at the 15th end. Over the remaining ends the rink performed strongly to complete a comfortable win and gain a valuable point.

Peter McGrail, Luke Donaldson, Nigel Hamilton and John Gilliland were up against the experienced Jim Corry on Rink 2. John experienced a slow start and found himself down 13-4 at 10 ends. However, he rallied his rink to reduce the arrears to 15-11 at 15 ends. It appeared that John could pull off an unexpected win as on the last end with him lying 3 shots for victory but Corry managed to squeeze in his last bowl for second shot and secure a 1 shot win for Castle.

On Rink 3 Ivor Mitchell, John McCullough, Alan Briggs and Ronan Cregan faced Matt Stevenson and got off to a flier to lead 1-7 at 5 ends. Stevenson turned the tables over the next 5 ends to lead 12-7. After 17 ends Castle had increased their lead to 18-12 and the Lurgan boys seemed down and out.

Lurgan scored 2 shots on the next end and a change of tactics to a full head paid dividends with Cregan’s rink picking up 10 shots over the last 2 ends. This secured a further point and proved vital to the overall victory as this was the last rink off the green.

Neil Sloan, Iain Ferguson, Peter Dew and Sam McCombes played Henry McFarlane’s home rink. After this rink’s heroics last week expectations were high and a four on the first end indicated another strong performance was in store. However, they only managed to win another 7 ends and fell to a disappointing 30-17 defeat.

Next week Lurgan entertain neighbours Portadown in Lurgan Park. A victory will probably secure promotion to Division 1 next year and provide a platform for their Irish Cup semi-final in two weeks’ time.