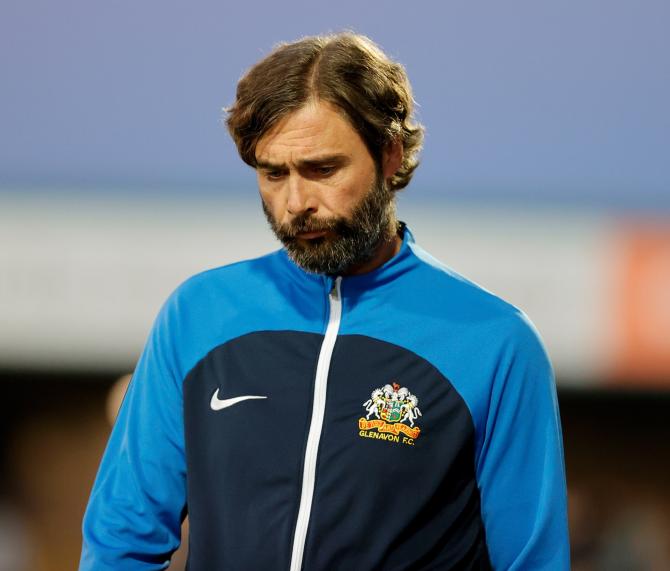 Glenavon manager Gary Hamilton was left dismayed by his side’s performance as they were heavily beaten by Newry City at Mourneview Park.

The visitors would score three times in the first eleven minutes to leave the Lurgan Blues shell-shocked, with two further strikes being scored in the second-half.

Glenavon would net a consolation goal through Josh Doyle after the break but Hamilton was left confused as to how the same group of players that beat Coleraine would be swatted away by last year’s Championship winners.

“I’m actually lost for words, I can’t understand it because it’s the same eleven players that were told to do exactly the same thing and all I can do as manager is apologise,” he told Glenavon Media.

“It’s my team but as I say it’s the same eleven players that dominated against Coleraine and could have scored six or seven goals, conceded very little chances yet it’s the exact eleven players on your own patch and you concede after two minutes which I can accept.

“However, you should then get your mindset right, use it a kick up the backside that we need, we have to switch on, pick up second balls, increase energy levels and do all the dirty work, yet we concede a second two minutes later. It’s scary.

“They could have scored to make it 3-0 bar a fantastic save by Rory but then they do make it 3-0 on 11 minutes and you’re thinking ‘how is this the same group of players, the same team, who are making these mistakes’?

“I’m not being disrespectful but no team should be coming to Mourneview Park and score five goals or even scoring three goals after 11 minutes.

“We played Larne here the other week with nine men and we conceded very few chances against them and they scored in the last second of the game but that’s because we rolled our sleeves up and done the dirty side of the game.

“Even at 3-0 down we created a lot of chances but you need someone to step up to the mark to give us a lifeline or something to lift us but nobody did that.”

Hamilton stressed after the Coleraine game that his troops needed to start games against fellow bottom sides well but believes last night’s showing was either a mentality issue or struggling to go into games as being the favourites.

“It has to be a mentality thing or the boys struggle mentally with the pressure of the tag as being favourites,” he continued.

“I remember Carrick coming here and winning 4-0 last year, Portadown the year before and I reiterated that we need to start games well against teams who will be in and around us in the table.

“I’m not being disrespectful but it’s more than likely Newry will be in the bottom six as they’ve just got promoted but you need to start well against teams like that.

“You need to get your points at home, you need that mindset going into these games and I was hoping to see a change this year and the elation of last Friday night would give them the belief and the confidence but they didn’t.

“Everything they did on Friday night, they did the complete opposite tonight.”