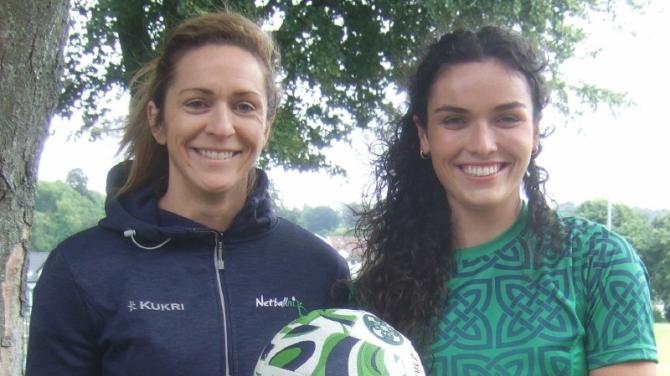 Northern Ireland netball captain Caroline O’Hanlon has seen and done nearly everything in the course of an international career which started two decades ago this autumn, but next Wednesday night will be a new experience for the evergreen 38-year-old.

The brilliant Bessbrook sportswoman will have the thrill of leading her girls in green on Armagh soil for the first time ever when Northern Ireland take on Uganda at Craigavon’s South Lake Leisure Centre (7.15pm).

O’Hanlon’s Warriors are hosting powerful Uganda in two friendlies – the second being in Newtownards at the same time the following evening – in preparation for next month’s crucial World Cup qualifying tournament in Glasgow.

Although the crowd capacity is relatively limited for the new venue’s international debut, it will be a great chance for local netball fans to see world-class centre O’Hanlon in action against an outstanding Uganda team ranked sixth in the world.

Nicknamed the She-Cranes, Uganda finished a fantastic fifth at this summer’s Commonwealth Games after coming third in their group at the expense of more established Malawi and then upsetting South Africa in the placings game.

Their prolific captain Proscovia Peace was the leading goal-scorer in last season’s British SuperLeague, netting an incredible 853 times for Surrey Storm, while the 6’7” Mary Cholhok chalked up 633 for reigning champions Loughborough Lightning.

That was in spite of Cholhok missing part of the campaign through injury so it will be a busy night in defence for Northern Ireland goalkeeper Michelle Magee, a Leeds Rhinos regular, and O’Hanlon’s long-serving vice-captain Fionnuala Toner.

In spite of giving away eight inches in height to Cholhok, the formidable Magee, who doubles up as an Antrim gaelic footballer, won the Warrior of the Match award when Northern Ireland lost 63-26 to Uganda at the recent Commonwealth Games.

O’Hanlon and fellow doctor Niamh Cooper, who shares the Storm vice-captaincy with Peace, will be working hard to cut off the service to the attacking circle of Uganda, whose main business on this tour will be a Test series against England.

Along with O’Hanlon, it will be a proud night for fellow county Armagh woman, Ulster Gazette columnist Frances Keenan, whose impressive performances at Birmingham 2022 saw her finish her first major tournament as Northern Ireland’s first choice wing attack.

Details of how to buy tickets to watch O’Hanlon’s Warriors in action against Uganda should be available on Netball NI online platforms in the coming days or by calling 028 9073 6320.

Warriors supremo Elaine Rice experimented plenty in two training games against English Premier League champions Oldham at the weekend, with plenty of fringe players getting court-time in Saturday’s defeat at Jordanstown and in Crumlin the following day.

Before facing Uganda in Craigavon, all-rounders O’Hanlon and Keenan will be hoping to steer their respective clubs to victory in a double bill of Buttercrane Championship semi-finals in ladies gaelic this Saturday at Killeavy.

Third division Cullyhanna will look to elegant midfield maestro Keenan in the opening game (3pm) as they attempt to follow their quarter-final upset of Mullaghbawn by claiming the scalp of another Division Two team Mullabrack to make the Intermediate decider.

In the main match (5pm), Carrickcruppen, with the incomparable O’Hanlon pulling the strings, will be expected to reach a 13th county final in 15 seasons at the expense of a Silverbridge side seeking to reach the first Senior showpiece in their history.